Fuse could not be found on sublime text 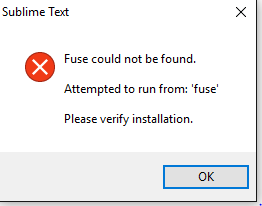 whne i open sublime text and open any file on fuse, it shows me this above messeges

Hi, can you please try to open a command line, and run fuse --version, just to verify that fuse is in path and that you have the latest version. If that doesn’t work, please try to log out and in again of Windows.

As I had the same problem the other day, Maybe its relevant

I guess that means you got it to work? If so, great! And and sorry for the inconvenience.

I have the same issue, and I just installed Fuse (even though at some point in time I had an older version).

Restarting computer does not help, and I just did a reinstall the other day and this came up.

When I go to the dashboard, click a project, and then click “Preview”, I see the command line and an error:

If i check the path, there is no folder called “windows**” and ** cannot be part of folder names in windows.
I do however have “windows-x86_64” in there… However, no make.exe anywhere in the subfolders.

If I run
fuse install android 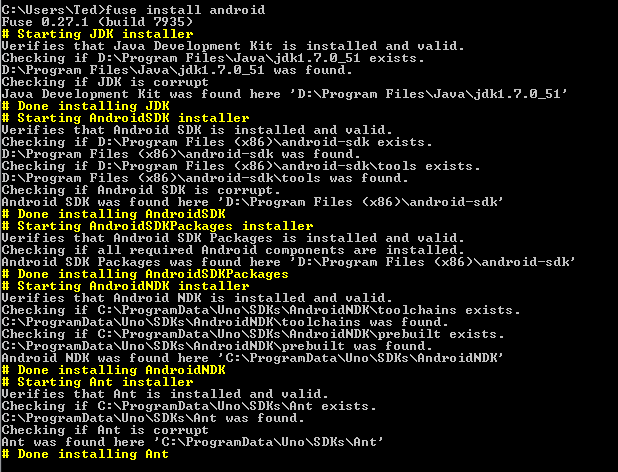 Should I delete it all and re-download or what? =)

So, this is how I “solved it” (workaround and fix)

First, remove the folders “AndroidNDK” and “Ant” from C:\ProgramData\Uno\SDKs\

Then, run this command in the command prompt:

That will reinstall Ant and AndroidNDK with the missing files, and then it seems to work!

I started randomly having this issues in 0.31.0 as well, and the “workaround” above worked. However I also needed to right-click Sublime and choose “Run as administrator” for local preview to work.

I suspect there are some permission issues going on, which would create this error for some, but not others based on their computers security settings.

Which exact issues were you having kesu?