In degug mode I get two errors: ‘function’ as invalid variable name at ‘CallObjectEventHandler.js:21’ and ‘Feature not supported on this backend’ at ‘Mutex.js:13:91’ 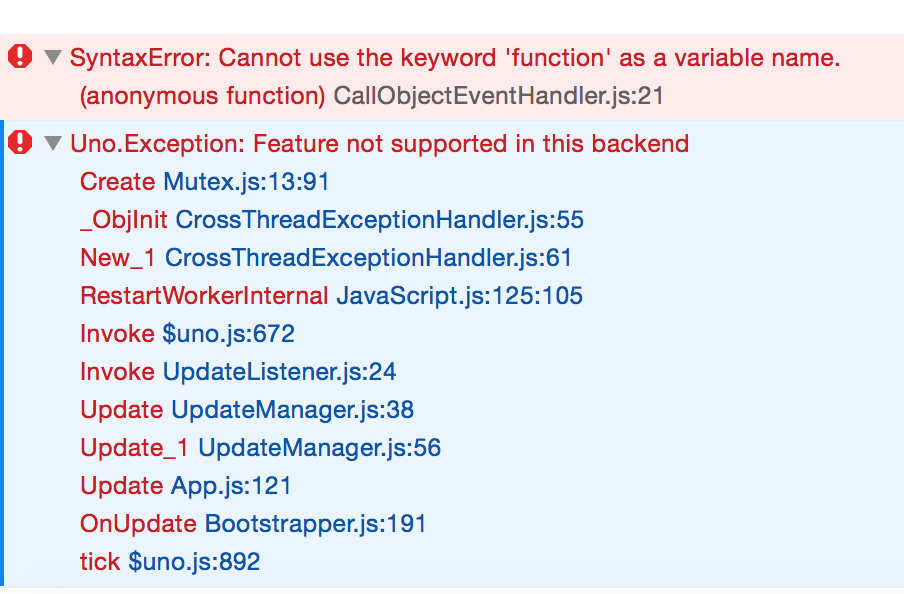 In Release mode I get the error ‘Cannot find file app.js’.

Thanks for letting us know, we’ll look into it.

Which browser and OS do you get the problem with? Creating a default template project (fuse create app <name>) and building for webgl works fine for me in Chrome, Firefox and Opera on Windows. (Not in IE but that’s currently not expected out-of-the-box).

Obviously it didn’t trigger for me since I didn’t use any of the reactive stuff where the bug was.

Anyway, the problem is that a newly introduced variable has the name “function” which isn’t such a good idea when it gets exported to JS. We’ll get this fixed before the next release.

Hi Jesper, are you trying to use FuseJS with the webgl export? That is currently not supported, and would explain the error you see with Mutex.js. FuseJS support in webgl is planned, but I don’t know when it will be done.

Yes, I didn’t know FuseJS wasn’t supported under WebGL. Maybe the docs should say this? So there’s no way for me to program from JS against a Fuse UI when targeting the web?

And yes: with WebGL Release build the build misses “app.js” which is referenced from index.html.

The docs have been updated to state that right now you can’t use FuseJS when targeting WebGL.

We’ll take a look at the app.js issue as well.