I am looking for the way to set the target device in FUSE iOS builds.

By default it remains as universal, iPhone and iPad, but I wanna target iPhone only.

I tried some tricks after build with no success.

After a quick Google search, it seems you can’t target iPhone only.

You can’t restrict an application to run on iPhone only in the normal way.The iOS is designed such a way that the iPhone apps will run on iPad in 1x resolution .

However if you really want to restrict your app to iPhone , you can achieve this by stating that the app requires feature telephony to work by specifying the same in UIRequiredDeviceCapabilities . This means it will only work on an iPhone.

If you open Xcode IDE it lets you choose the target device like this: 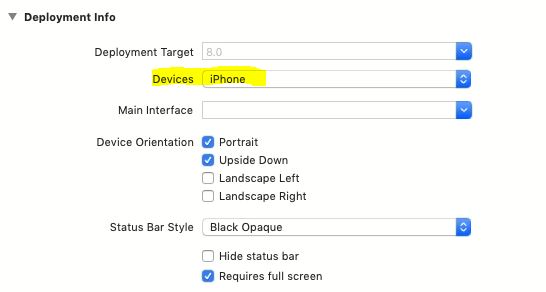 You could just test it only on your iPhone with universal on? Then when you’re going to production, switch it to iPhone only.

If this exist in Xcode it should be easy to expose a iOS.Devices property in .unoproj to persist this value.

I created an issue about this feature at https://github.com/fuse-open/uno/issues/222

I see there is a fix published to the repo but I dunno how to do to apply it to my environment. How can I do it?