This release brings sweeping changes to the Fuse workflow. Please view the updated tutorials and guides for details. https://www.fusetools.com/developers/guides/tutorial

So this new JS feature… Would it produce a hybrid app? Or would there still be some compiling to create a native app?

JavaScript is just a layer on top, meant for pure business logic. It runs on a separate thread and is not allowed to touch UI directly. Uno is still there doing all the heavy lifting, in pure native code. It has nothing to do with HTML5. So whether it’s “hybrid” depends on what yuo mean by that. We certainly don’t use that term

I install this version in my mac but does not open… It closes automatically.

This is my Mac Version:

Don’t you get a tray icon? The workflow is quite different from the previous version. Have you seen this https://www.fusetools.com/developers/guides/tutorial

So you are basically saying a developer can choose their level of abstraction. Right? Everything starts with Uno in the background with UX for layout and JS for things like: User clicks this button and the application is now in this state.

Is this development process backwards compatiable?

For example Dev A only wants Uno code to deal with but Dev B already started the project using JS… Can dev A transpile the application back to pure Uno? This way they can continue ahead

Is this more akin to something like Adobe AIR. Where you have a native runtime and the JS content runs on top of this thing?

Yes, I had not noticed. But how to open an existing project ?

I only have this Options: 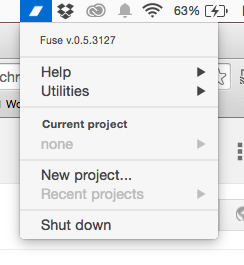 Currently it’s ES5.1, but we intend to support ES6 later.

You can look at it this way: A fuse project consists of an arbitrary number of Uno, UX and JS files. You can choose to do your app in pure Uno if you want. Or any combination.

The JS layer is optional to use, you can think of it as top-level scripting on top of a native app/game engine

You don’t “open” projects as such anymore, you just edit your Uno / UX / JS files in your favorite editor.

… to get the latest sublime plugin. Then you can right click files in sublime and say Preview -> Local, iOS or Android.

You can also build and preview your projects from command line:

We are still iterating on this workflow and making it completely intuitive, and this feedback is very important for us. A big goal has been to facilitate better plugins and editor integrations, with the tray menu/Fuse application as a supporting player rather than a core place for interactions.

How we’ve imagined it is with Fuse observing changes or interactions made to projects, and treating the project that was last “touched” as the current one. Creating a project using the fuse create commandline command or using the tray menu will touch a project and allow you more from that point on.

The idea of “opening” a project is somewhat foreign since Fuse does not “open” a project ever, but rather just tracks the one you last did anything to. We’ve some immediate ideas on how to improve this user experience, but for now, try right clicking ux files and previewing from the OSX context menu or within Sublime to “touch” them, and thus set them as current project and add them to the project history. Most commandline commands will touch projects.

The updated tutorials and guides should hopefully make some of this clearer in the short term.

Thank you for your patience

Thanks! Now I read all the new documentation and I understand the new mecanics.

But I need some help…

I get some errors using:

You should check out the changelogs and changeblogs.

Here are some hints though:

Thanks for the patience! I only have these errors that I can not solve!

But I get this error:

In this version how I add a reference to a package like:

You add references by editing your .unoproj file.

For Mask, do this:

This latest update removed a feature I was using for my app:

Does it have a new term? I could not find it in the changeblog or the changelogg.
The closest I could get was

but that would require me to keep a library of the old values of all textboxes that uses this function.

Unfortunately, that feature is gone. However, it is relatively easy to reconstruct:

And then in your UX, use this instead of TextInput:

Is the Image FilePreload feature removed?

Also, may I get some hint on the new name of BundleFileImageSource?

Image.FilePreload removed, use a MemoryPolicy instead. The default policy preload bundle files. So you can just remove the attribtue, and it should work the same way.

Or maybe this is not working: