This is mainly a bugfix release, please see the release notes for 0.8.0 below for more details about the 0.8 release.

In this release we have fixed the bug where you didn’t get selection cues, and the inspector didn’t work. We have also introduced new buttons on the dashboard to open the monitor and the inspector.

API for both are exactly the same as before. 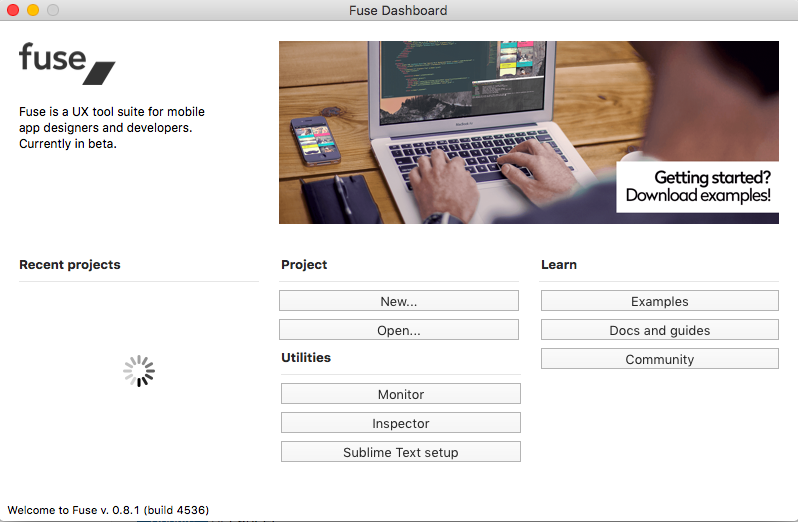 WOJJ6gSx5EiJ-legacy-files-Yl0DBB9oWYdtgn7I-7mWInvChgqa3y9RzqbejTslj.png798×522
It’s all that can see. After i start a new project or open downloaded example - nothing happens.
Bent October 6, 2015, 9:15pm #3

Hey there, can you tell us a little more about what fails? Any error message? When does it fail (during installation or after?)

Also please give the output of mono --version and which mono in the terminal.

I’m having the same issue, I think. I’m on El Capitan and seeing the same thing. I’ve only just got it, so it’s a clean install.

Trying to create a new project on the commandline appears to hang on Connected to fuse daemon and trying to run fuse preview on the project which is created does the following:

I don’t know if it’s relevant, but the tutorial says the .ux file created should contain some content, but it appears to to be just an <App> tag and its corresponding closing tag.

I’ll paste my output below:

Not sure if this is the same issue, but running the android export fails with the following (after having done the fuse install android step):

It looks like the Preview version of Mono for El Capitan doesn’t work. I’ve downgraded to the latest stable release and it’s running now.

Hey, thank you for the error report. Mono 4.2.x is considered to be a bad mono release. It is even labeled as an alpha release (that is not so clear from their download page).

This mono version should also work on Mac OS X - El Capitan, despite what the mono download page says.

We are sorry about being so unclear about which mono version we support.

Hey, thank you for reporting!

Hopefully will the above post fix your problems aswell, based on the information you gave us.

This release contained a bug that caused preview build problems on iOS and Android.

This has now been fixed, downloading the latest release should get rid of that issue.